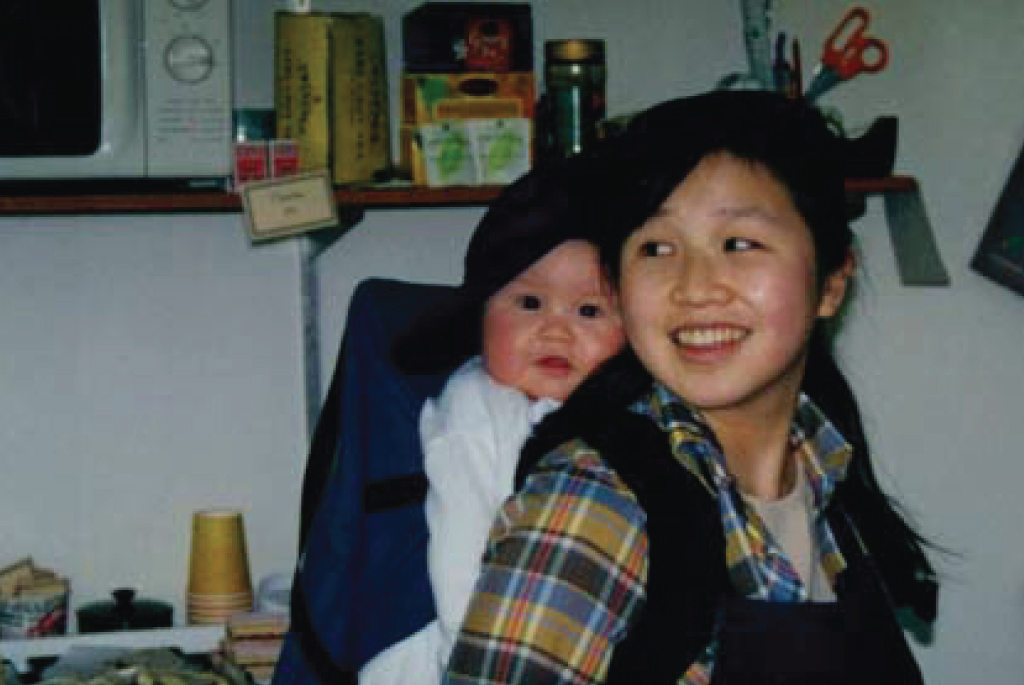 The Baby That Sparked It All

Baby Myra – who inspired the start of the food business

When I first held my own daughter, Myra, I looked at her face in my arms. It was the happiest moment of my life. I couldn’t believe that there was this little life that had nothing else but me to protect and care for her. It suddenly dawned on me that my daughter had somebody like me to care for her, but what about other kids – children with very poor families?

I started to think about my life a little bit more.

One day the idea to start our own business came up. Myra was only 3 months old then. Normally you’d think that it’s crazy to start a business when you have a 3 month old baby. But I thought it was the perfect time because I felt really connected.

Eventually we moved to Australia to set up a food production company that produced healthy packaged meals. We worked really hard to set up the kitchen and do all the construction ourselves within a small budget.

When we were just completing our kitchen, an unexpected thing happened. I realized I was pregnant again for a second time. Myra was already 2.5 years old at that time.

How To Press On in the Face of Challenges

So I was pregnant again. I had a 2.5 year old daughter. I didn’t have a lot of money. And I just moved to Australia, a new country where I didn’t know a lot about how businesses worked.

I nearly thought of changing the plan and not doing it, but we pursued anyway. I think we did it not because it was about what we wanted to do, but because we felt committed to our mission.

We started to operate and worked 16 hours a day everyday 7 days a week. We started with few orders, which grew to a few more. But we had a big rent to pay. Every month we worried about how to pay the rent and other costs for the business. As time passed I realized that my tummy was getting bigger and bigger.

At one point when I was 8 months pregnant, it hit us that we couldn’t pay the rent anymore next month. We had no more money left.

We were selling more, but the large overhead meant we couldn’t continue our operations. There was another issue as well. I was living in Australia on a 5-year permanent residency. So I didn’t have normal medical care from the government, which meant that it would cost so much money for me to go to a private hospital.

One day an idea came to me, and I thought ‘This is it!”

It’s crazy that we have 2 places. We’ve got home rent to pay and kitchen rent to pay. Why don’t we move out of the house and into the kitchen!

The kitchen was in an industrial warehouse in a factory zone. At the top of the kitchen was an attic where we stacked up packing cardboard boxes. I said ‘There is a big space up there we could live there.’ So we moved in the attic and lived amongst the cardboard boxes. We had a cozy house there. I thought it was great that we didn’t need to pay for rent at home anymore. Suddenly we had more funds to keep going. We also didn’t need to travel anymore. We wake up, and we were already at work, so we saved time as well!

Great Ideas Come When You Need Them Most

At one point when I was 9 months pregnant, I realized that I would be having a baby at any time. But what would I do with the baby?

A great idea struck me. I had a home birth back in New Zealand with my first daughter. I actually knew how to have a baby.

I pointed to the big industrial kitchen sink and said ‘That’s where I’m going to have a baby.’

The time came, and Kai was happily born at 3am in the morning in this industrial kitchen sink.

About 2.5 months later, we were still living in that kitchen, and Kai was growing up in a vegetable box on the floor. I moved him everywhere I went. We say now that it’s the reason why Kai doesn’t like vegetables, because he has this trauma of vegetable boxes!

Kai was born in an industrial kitchen sink

There was a Japanese lady volunteering and staying with us as part of a homestay programme – Sayaka. She was amazing. When we were supposed to move to the kitchen, I felt quite uncomfortable because she was supposed to be with us for a long time, but we suddenly had to change our plan. I told her that we decided to move to the kitchen because it was the only way we could continue our food company, so it was better for her to consider looking for another place to go.

Sayaka looked at me surprised, then she said ‘Wow that sounds really fun! I will move with you.’ So Sayaka came with us to the kitchen. When Kai was born, Sayaka was one of the people helping me. She said it was a life-changing experience.

Things Got Better…Or Did It?

Eventually, more orders started coming in. We finally could move out of the kitchen and find a place to live again. More people starting coming to live with us as volunteers. At one point we had 12 volunteers living in our house.

The food business at a weekend market

When you have a sense of mission, you will attract people who are dedicated. We didn’t pay anybody, but people were coming. Every morning we would all squeeze into a van, some people would run or cycle to the kitchen. We would all work long hours, come home, cook dinner together and eat together every night. It was such a fun time. The kids had a great time having all these lovely people around.

One day something really hit me. 5 years on after all this hard work and never-ending effort, we were still in the same place.

We started this company because we wanted to give back to support children who didn’t have food and education. Our intent was always to give the profits back to fund orphanages so that we could share the joy of eating with those who didn’t have those privileges. And even though our business was bigger and more established, we were still not there. We still had things to do. We were still busy. We still had to invest in new equipment and new staff, or better packaging, doing marketing and so on.

This was crazy because that time would probably never come. 10 years on we would still be busy. We would still be doing lots of things. And we still wouldn’t be able to give back or take time off to help others.

I belonged to a group of social entrepreneurs who believed that giving back was the ultimate reason for being in business. Through it, we went for many workshops and conferences. At one such workshop, people were invited to submit business plans for a competition, like the ‘American Idol’ of businesses. Our food business was selected as a finalist, and so we went through mentoring and judging sessions to develop the idea.

During a mentoring session – Paul was one of the mentors – we were talking about this mission of giving a meal to somebody with every packaged meal we sold. Somebody in the room said ‘Oh, that’s Buy 1 Give 1.’

When she said it, that word almost stuck in the air. We could see it just sitting there in total quietness – Buy 1 Give 1. A few seconds later everybody in the room said ‘Wow what a great idea, Buy 1 Give 1.’

We realized that even though we really wanted to do something, often we would delay it because we had something else to do. The ‘I’ll wait until I’m ready‘ mentality. It was the same for our giving. Even though our business started through the desire to give back, we thought we had to be successful in order to give back. But when would the success come? Success has no specific concept nor a specific end. You could say ‘I’m already successful where I’m at.’ Or you could say ‘I’m not successful I still need to do more before I can do what I want to do.’

The Buy 1 Give 1 concept made it possible for anybody to give back at any stage, rather than trying to be successful first then giving back as a result of success.

Everybody can give small amounts. It doesn’t matter how small. As long as it’s small enough for us to actually do it, we can do it today rather than waiting for tomorrow. That’s how B1G1 came about.

We went back excitedly to our own business and started to implement the concept of Buy 1 Give 1 (B1G1) in our company. We shared the mission with our team members so everybody could imagine the smiling faces of children having happy meals as a result of the meals we pack, the stickers we put, or the boxes we stacked. But B1G1 wasn’t just about one company doing good things.

The Beginning of Small

One day when I was chopping something, I suddenly realized ‘Oh my gosh what are we doing. We have such a wonderful concept but we aren’t seeing the real magic of this concept.’

Look out for Masami’s Story Part 2: From Lamb to Lion, coming out next week. Subscribe to this blog through the form on the right for more updates and inspiring stories.